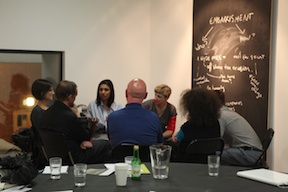 The first session of the ‘terms & conditions’ series focused on the question ‘Who are the migrant workers today? (mapping precarious labour)’ using it as a way into opening up a complex landscape of increasingly precarious labour market, where the most vulnerable are exposed to abuse, de-skilling, low pay, under employment and dangerous working conditions.

The session opened with Dr Faiza Shaheen, who is an economist and a senior researcher with the New Economics Foundation, whose work is specifically focused on economic inequalities. She is the author of the report on the effect of the immigration cap ‘Why the Cap won’t fit’. Faiza brought really important stats into the picture –starting with the pay gap which is still present, male £8.56 and female £7.66 per hour, and then I was particularly struck by the two charts shown here (image 1 and 2), where we can see how the labour market is deeply affected by gender as much as by migration. Through her stats Faiza showed how the high salaries are getting higher and for those already on the low pay, they are getting even lower, the effect of it being, as Faiza used the term hollowing out of the middle.
Kevin Ward, Professor in Human Geography at the University of Manchester, and director of cities@manchester http://citiesmcr.wordpress.com/. charted ways in which the labour market in the UK has changed in the last thirty years, with the restructuring of the public sector, expansion of low paying, poor quality private sector industries, and the turn towards contract and temporary labour market through the formalisation of informal internal arrangements, ‘contracting-out’, all this resulting in an increase of ‘non-standard’, often insecure or precarious employment forms, which affects those on the lower end of labour market, such as, but not exclusively, the migrant workers. The term that Kevin used particularly stuck with me – workplace/out of place.
Jose Louis Sanches, from the Latin American Workers Association (LAWAS) who firstly introduced us to the work of the association –a migrant-led, self organising group of Latin-Americans working mostly in the service sector especially cleaning. Through self-organisation, education, collective actions and campaigns, the association’s mission is to expose and challenge exploitation and victimisation at the workplace. Jose Louse spoke of his own experience of working in the service industry, for employers such as west-end theatres and hospitals, who were paying below minimum wage, and would not meet the basic standards of health and safety. He also spoke of the deeply unjust practices of blackmail and threats of deportation by employers, using the precarious immigrations status of their employees would lower the wages and health & safety conditions. Jose Louis was part of the group of migrant workers who were detained, and six of his colleagues were deported, but with the support of LAWAS, other groups and IWW, he managed to get a solicitor and was released from detention.
To find out more about LAWAS visist http://www.lawas.org/, they organise language exchange classes (English-Spanish), so if you are interested you can join in every Saturday, from 10am to 12pm, Room L123b, London Road Building, 100-116 London Road, London South Bank University, SE1 6LN.
Precarious Workers Brigade, a UK-based growing group of precarious workers in culture and education, after a brief introduction, proposed to use the remaining time to create three working groups, to discuss and organise a campaign around three issues/questions. One group worked on a response to the new troubling development of aspirational border control, with the Arts Council becoming a ‘Designated Competent Body of the Home Office’, with the power to ‘assess applications from artists applying for Tier 1 visas to enter UK on the basis of their exceptional talent’. http://www.artscouncil.org.uk/about-us/tier-1-visas/
A second group talked about ways in which cultural sector workers can forge solidarity links and campaigns with workers in other sectors, and the third group discussed ways in which ‘embarrassment’ can be used as a campaigning tool.  To find out more about the collective visit Precarious Workers Brigade and to join in.

The combination of talks, discussions and workshop shifted the event into more of a hands-on session, with the issues we started mapping turned into questions around how do we address these unjust conditions and how do we build solidarities and networks that go beyond our immediate concerns, but are linked by the ever deepening precarity of working conditions.

This event opened up and addressed also the questions that are preoccupying me more and more, and which are obliquely behind the whole series ‘terms & conditions’: What moves us into action? What is the relationship of knowledge and action? What is the role of art(ist), art production, and an art institution in present moment of crises?
All the way through the series, in each event, I think there will be this inherent movement between mapping and understanding the ways in which terms and conditions in which we live and work are changing and becoming more precarious, but then also articulating how to re-claim those terms and conditions in which we want to work and live in.

Blog post by artist Margareta Kern, to find out more:  terms & conditions at Iniva for future events.
Posted by At the Intersection: Art & Economies at 12:45